Interview with NORBERT WALLY, Singer, Guitarist and Song-writer after

“U IME OCA / IN THE NAME OF THE FATHER – The Bosnia Chapter”. 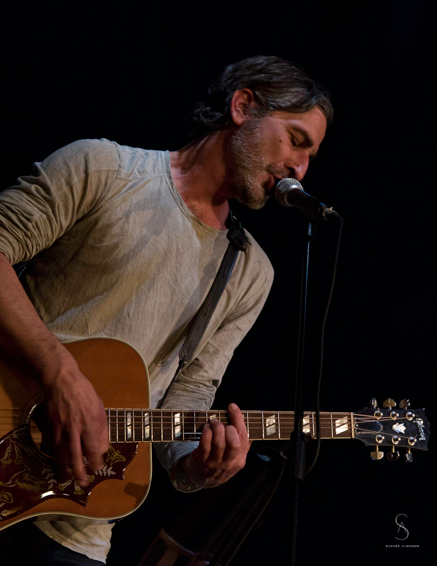 You have written 2 songs for “U IME OCA/IN THE NAME OF THE FATHER” which you perform live in the piece. What was the starting point in your songwriting? Your reflections on the journey to bring them onto the stage.

The starting points of the two songs were very different: I wrote “Everybody wants to be wanted” only a couple of days after Darrel had first confronted me with the idea of the project and with the question whether I wanted to be on the boat. He provided me with basic info to the topic, some video links, and interviews out of which I tried to find and then express a perspective. I kept rewriting the lyrics, trying to wipe away any inappropriate pathos and pity, which I learned is exactly what most Children Born in War DO NOT want to arouse in people. And this wish to be seen and accepted as ‘normal’ people of the society – with sympathy but not with pity – is about the only thing these CBOW have in common. And that was the second obstacle: There probably isn’t that one collective trauma or sentiment towards the issue. They have all had very different Curriculum Vitae and very heterogeneous perspectives on the matter. That also due to the fact that those perspectives had hardly ever been spoken out and shared so far.

But back to the lyrics of the first song: I had my doubts but Ajna1liked them she said, and that made my day! 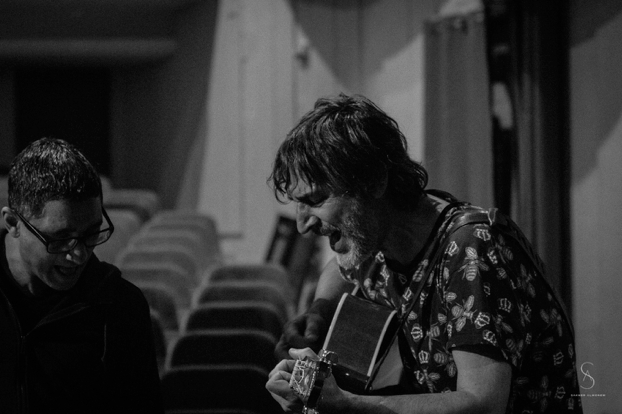 I wrote the second song “Something inside of me” almost a year later, three days before I left for Tuzla. And “wrote” is not the right way to put it, as I actually just took a real interview2of a Child Born of War. I grinded it a little to fit the phrasing of the song, the melody of which really came out of the rhythm of the words. I only had a vague idea of how the song was going to sound in the end. Never planned to sing it myself, but sang it to Darrel right when I arrived at the apartment in Tuzla (at 5 am in the morning). He liked it and asked and also helped me to

write a hooky refrain to it. 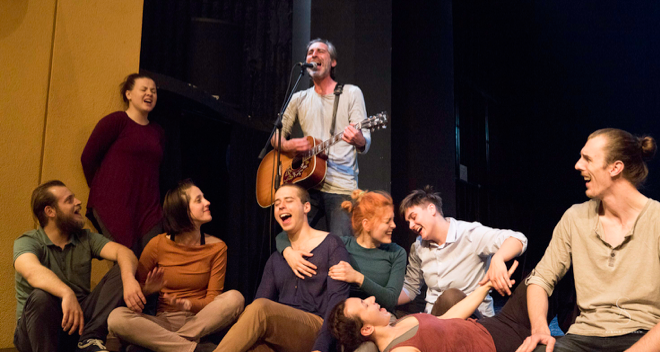 You contacted now with a difficult topic (Children Born of War) and meeting some of the children themselves, while also spending time in the territory where those children live, how did that affect you as a singer and as a person?

Meeting these people was not different from meeting any of the other actors involved in the play. It felt comfortably normal to be around them. And to sing in front of or beside them, for that matter. And as said earlier, I felt relieved and strengthened by the positive feedback the guys gave me. It felt good to be on stage with these great people and that experience (and the memory of it) will not cease to motivate me both as a singer AND a person (but then a singer IS a person – although my bandmates3might disagree to that).

As for the territory: Yes, that did something, too! Don’t know what, though. Have to come back.

Onstage you also accompany one actress singing a traditional Bosnian song “Što te nema” – tell me about that, being witness to the scene, supporting a performer through the resulting stage action.

I really love that song and it was great playing it with Mirna4! There was a strong feeling of trust between us onstage. And there had to be because we mutually depended on each other, mostly rhythmically. But also, in the notes: We both knew, everything is going to be fine, as long as Mirna finds that very first note. And she always did onstage (backstage not always). And of course, the scene itself, and the one right before are two very emotional ones. Definitely, an exciting moment in the play to step out onstage. Ah yes, and there was Denis, the sound guy, who could play the song way better than me and showed me how to do it right! 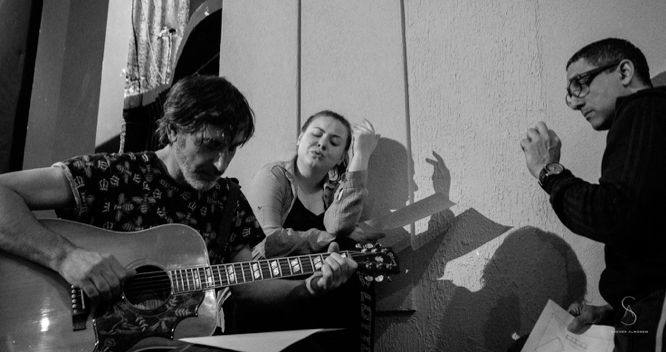 It sounds pathetic, but in some way, it’s going to be “life before” and “life after Tuzla” for me. I was and still, am very proud to be part of the thing. Proud because I felt that we really triggered off something BIG there, also on the artistic level. I think there’s also going to be “a Tuzla before” and “a Tuzla after” the show we did.

Second, I shall be forever grateful to have worked with such wonderfully nice people! The positive energy of everybody involved was contagious from the start and despite the hardly uplifting issue that was treated in the play, it was a lot of fun to work on it.

And thirdly, I found that Darrel did an exemplary outstanding job there – during the whole process but especially in the course of the week, that I could witness it. He was a role model of discipline and somehow managed to motivate the actors to bring out everything that’s in them. I lift my hat, that was brilliant! I also thank him for the trust he put into me and my work!

Production: IN THE NAME OF THE FATHER